Marvellous Mammals at The Natural Eye 2021

The Natural Eye exhibition has a lovely collection of work featuring mammals and this article will pick out a few examples to show how each artist finds a different way to celebrate them.

John Dobbs has eight works, all of mammals and all observed in the wild. He has also made expressive paintings of Wild Dogs, Elephant, Lions and Tigers but his urban fox is a species that we can find close to home. Ceramic sculptor Simon Griffiths has also been inspired to make a fox. 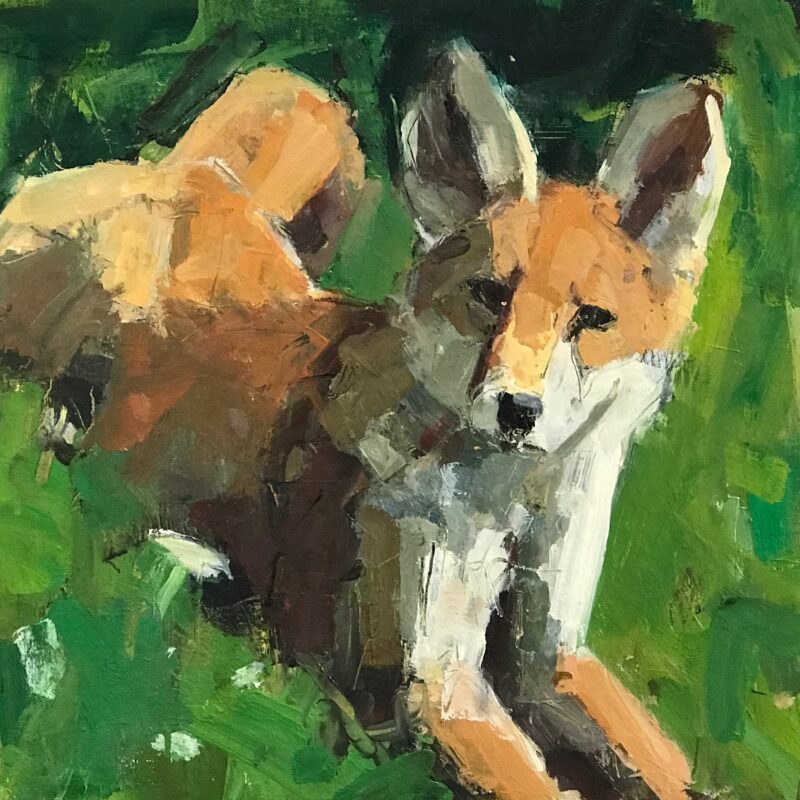 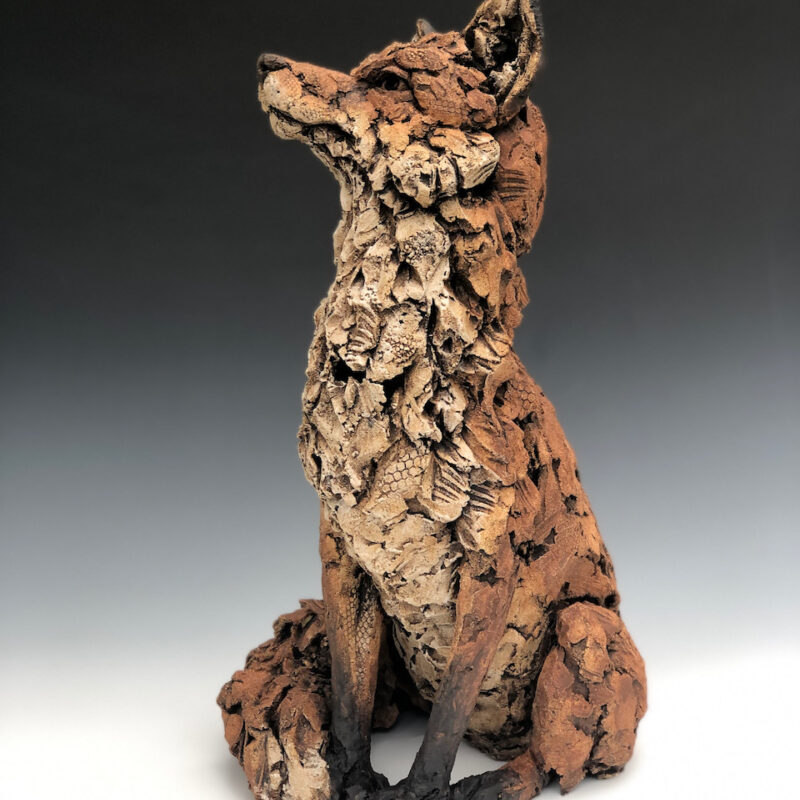 Sculptor Nick Mackman has created a charming trio of Wild Dogs. Skilfully sculpting them from clay then using the raku process for firing, her glazes really bring the works to life. Like John Dobbs, Nick has spent time in Africa studying her subjects which is very obvious when you view the sculptures. (Click on the detail for full image) 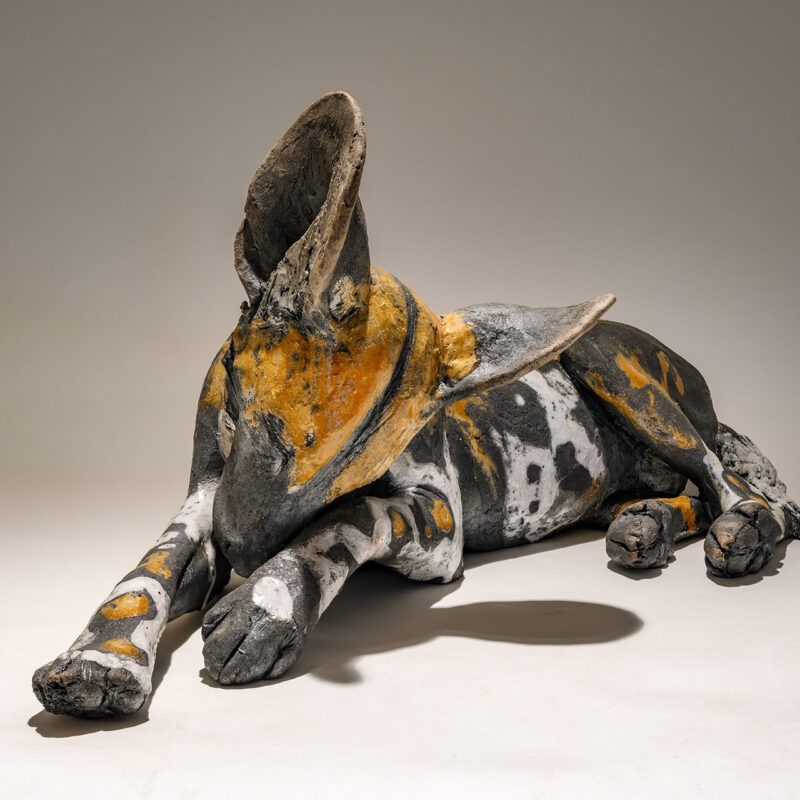 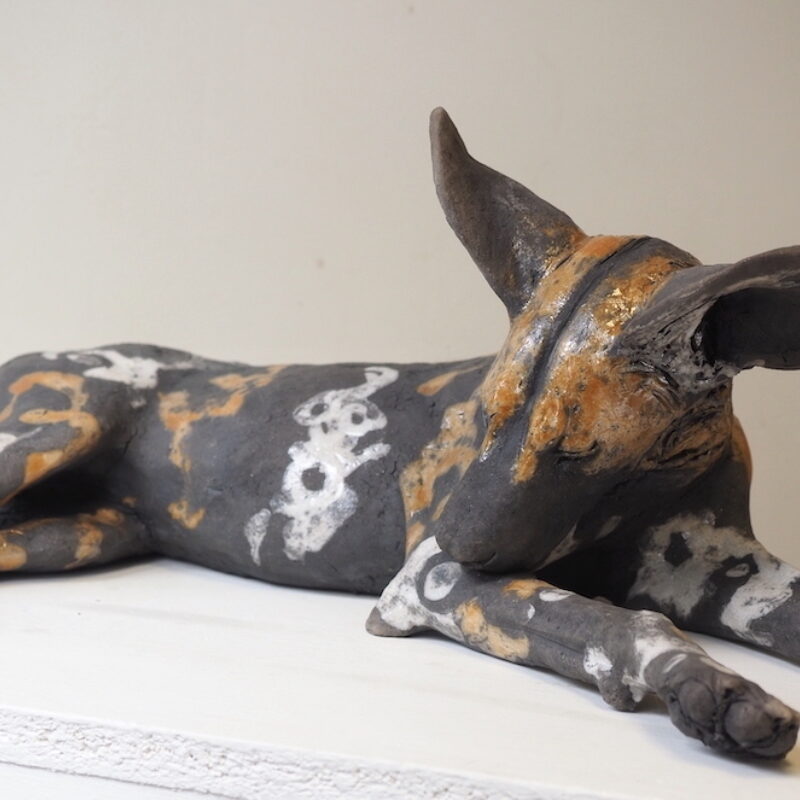 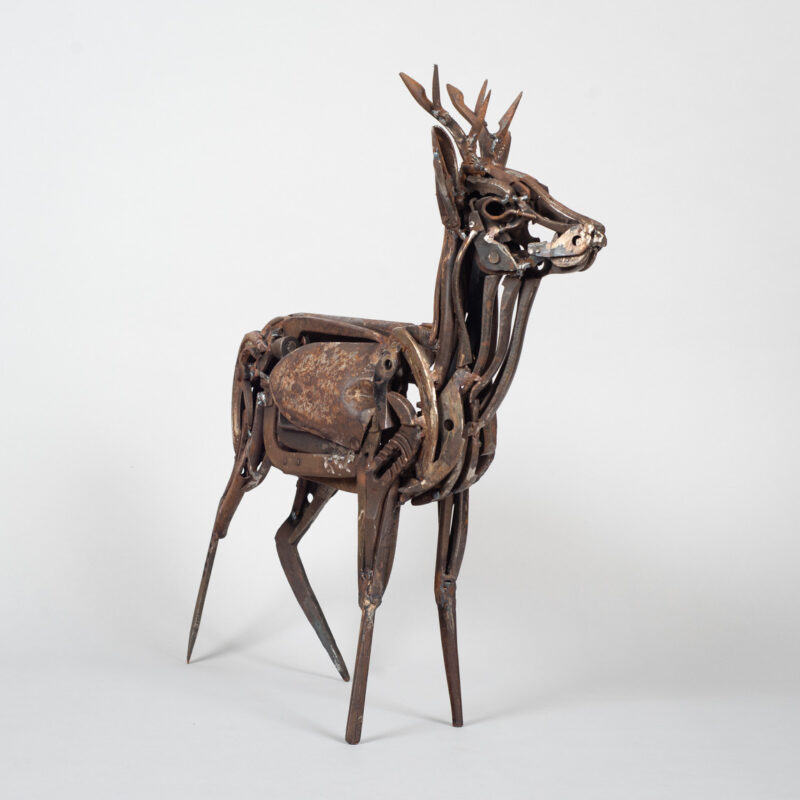 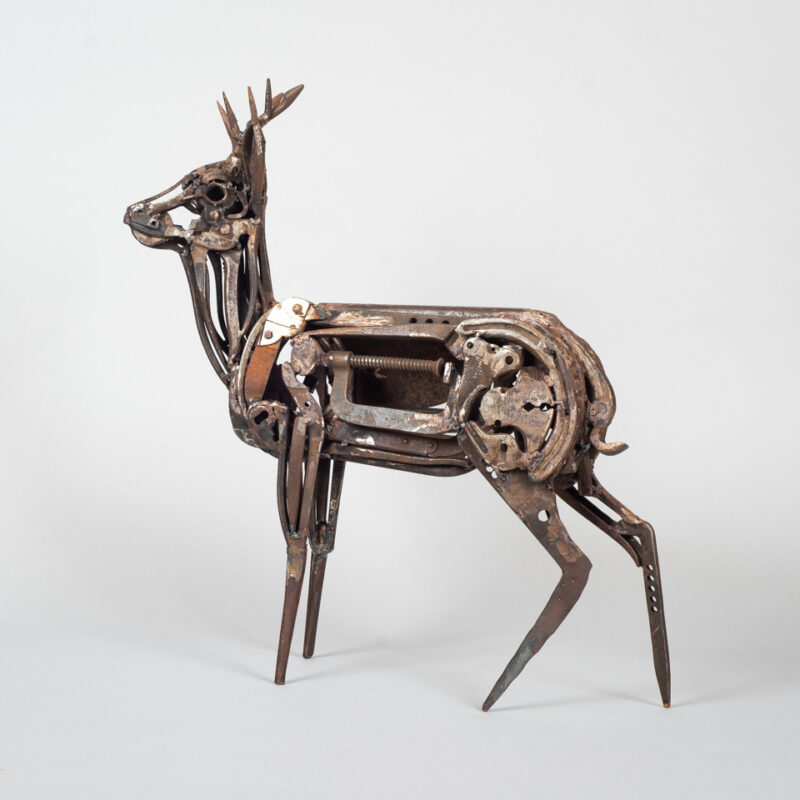 Fellow sculptor Harriet Mead, has been looking at Roe deer near her home in Norfolk. Made using found objects G‑Clamp Roebuck has plier handles to describe the antlers and G‑clamps in the body. Another mammal which has a stronghold in East Anglia is the hare. Suffolk artist Andrew Haslen has painted two large oils of hares for the show this year. He has a very special knowledge of hares having successfully reared orphaned leverets in the past. 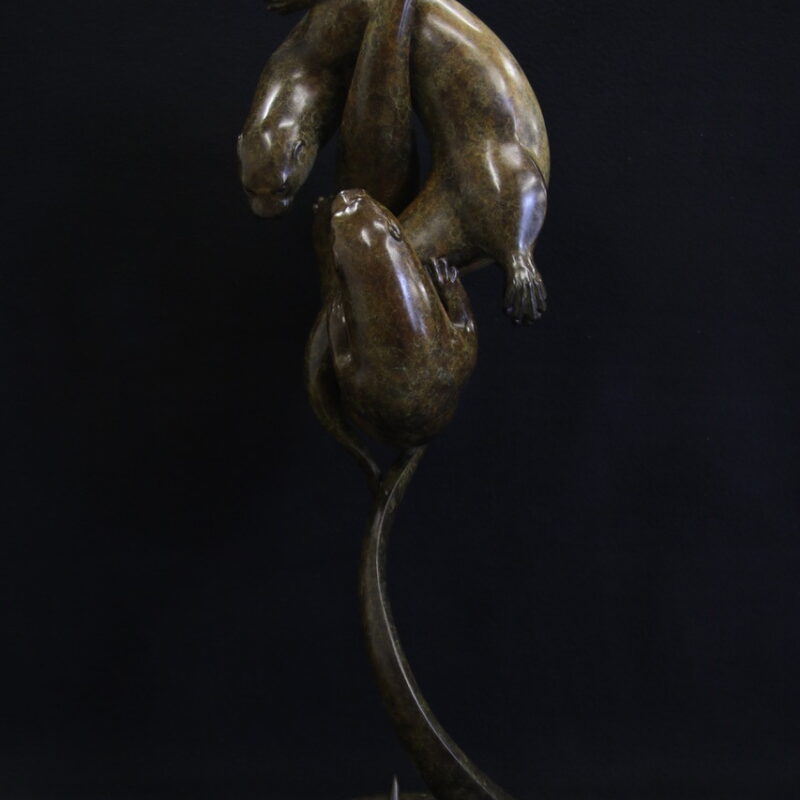 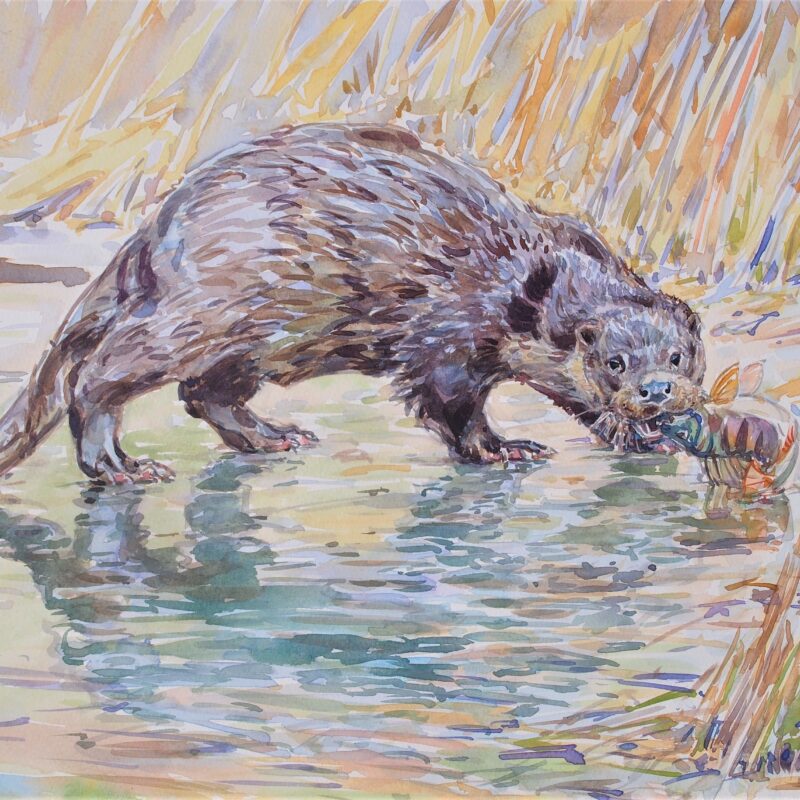 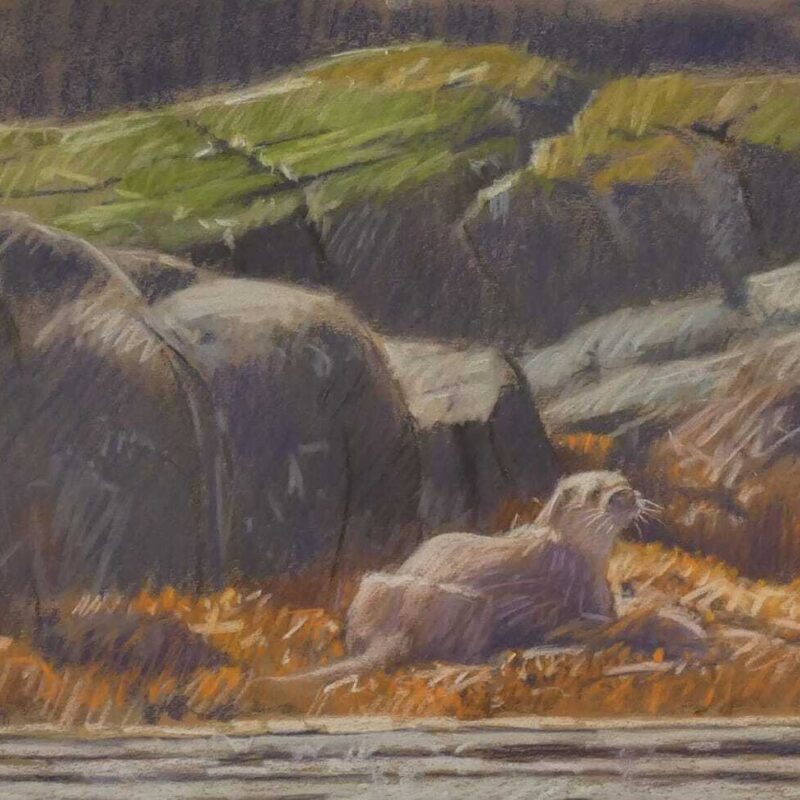 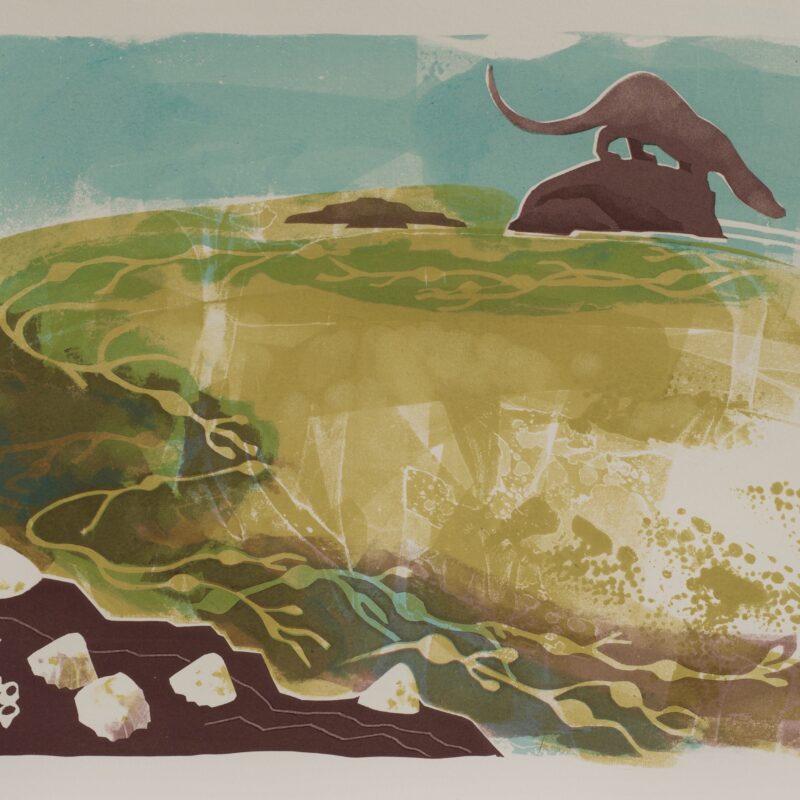 Otters are a conservation success story in the UK. Following a drastic decline due to persecution, numbers have built with populations now making use of waterways across the country. The spread of this once rare creature has now made it slightly easier to see them. Adam Binder had sculpted a beautiful bronze of an interacting pair, and David Bennett has painted one he saw on an icy canal near his home. John Threlfall and Jane Smith both live in Scotland so are lucky to see otters regularly, however both these works were created from seeing them in Argyll near Jane’s home during the Argyll Hope Spot Project earlier this year. Jane hosted a number of SWLA artists to create work about the rich marine life of the area. To learn more go to The Argyll and Islands Hope Spot Project. 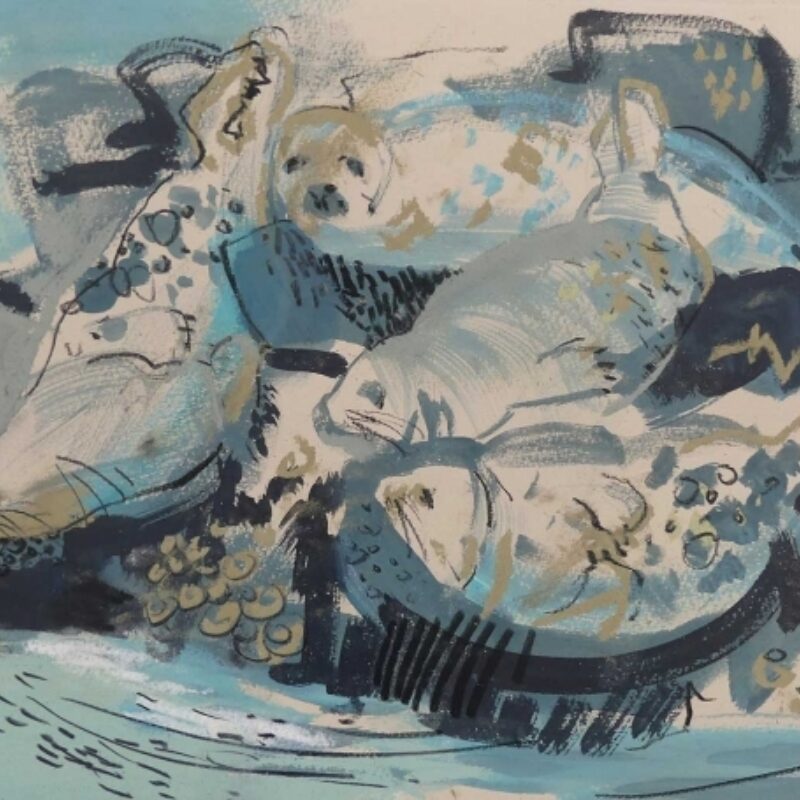 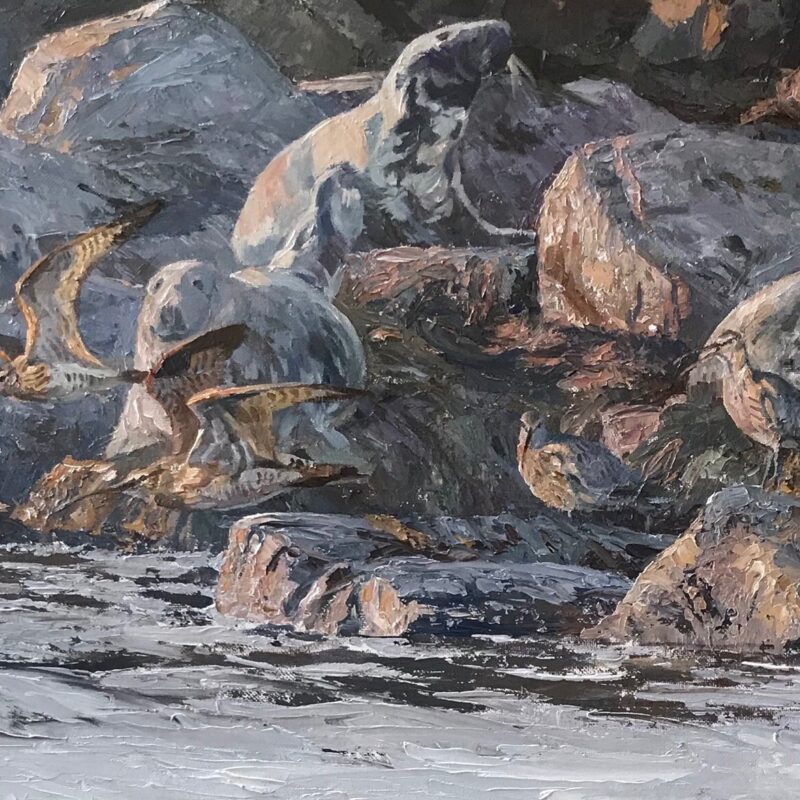 To stay on the watery theme another mammal to catch artists’ imaginations are seals. Orkney artist Tim Wootton has a lovely oil of Curlew and Common Seals and Liz Myhill has an expressive mixed media piece of basking Common Seals.

Finally, an example of one of the largest mammal species on the planet-Bruce Pearson’s beautiful relief print Southern Ocean.

The idea for the print was an encounter with a pod of humpback whales in the Southern Ocean. Surging past whales were streams of seabirds - Antarctic and Cape petrels, black-browed and light mantled sooty albatrosses, and a lone wandering albatross. Every now and then one of the humpbacks would breach exploding out of the ocean swell in a spray of energy. That, and the passage of birds sweeping along on the power of the wind, created a profound sense of the elemental nature and richness of the Southern Ocean.

A graphic response was a way to capture some of that excitement and a relief print would allow for bold and simple shapes and just a few limited interlocking colours to simply express an extraordinarily complex and exciting experience.

So that was just a taste of what you can see at The Natural Eye this year. To see all the work, take a virtual tour or purchase a piece visit Mall Galleries.