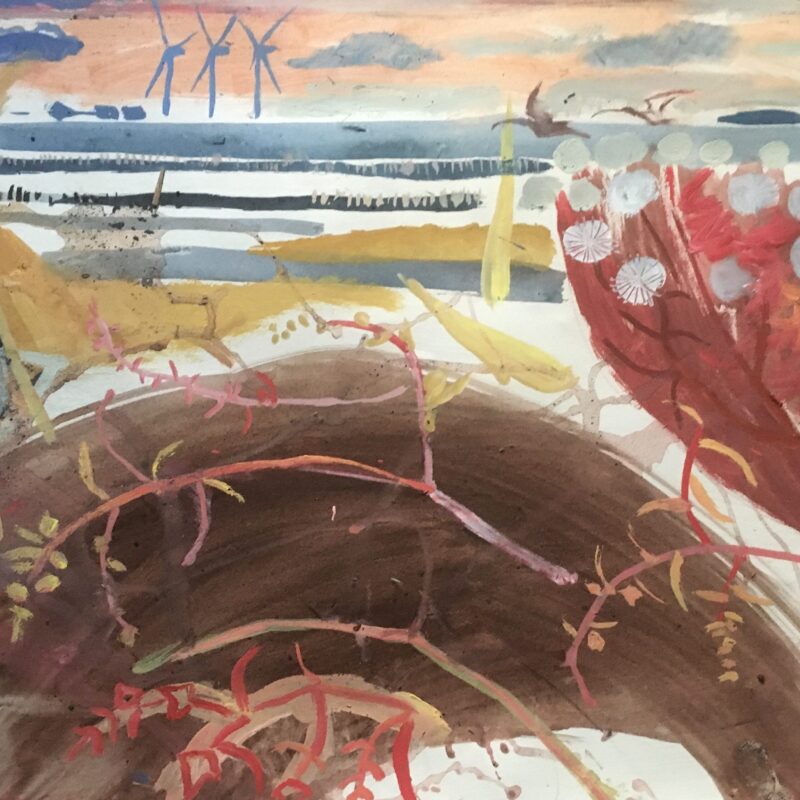 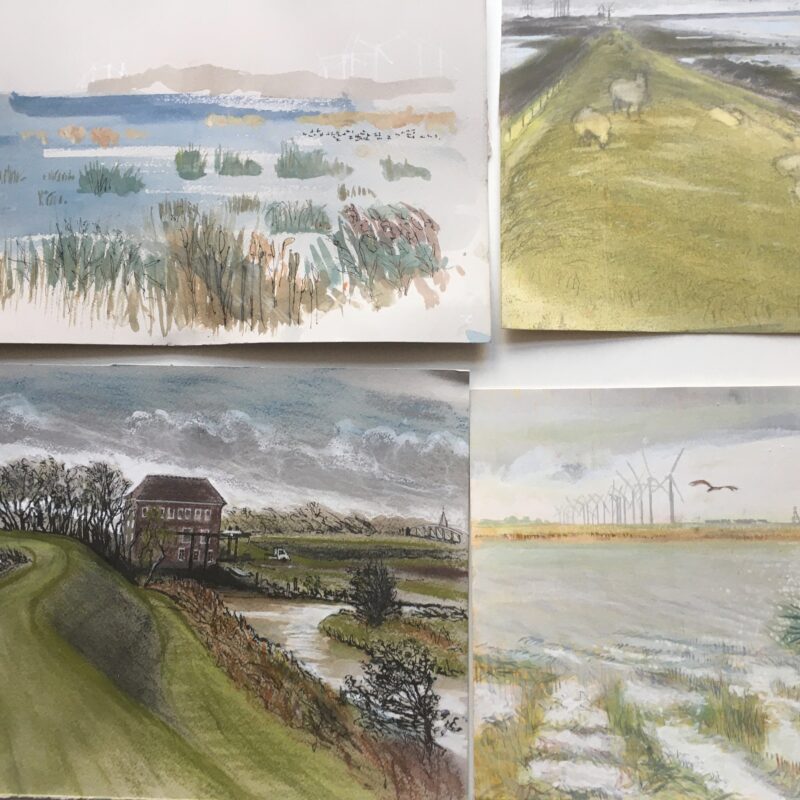 The Wadden Sea is the largest tidal flat system in the world where natural processes proceed undisturbed. More than 12 million waders, ducks, geese, and gulls depend every year on the area’s rich food resources during the migration in spring and autumn. This incredibly rich natural habitat forms the backdrop to one of the SWLA’s most ambitious and innovative projects — a collaboration developed together with National Parks Denmark.

Denmark’s national park administration manages the spectacular wetland and UNESCO World Heritage site stretching between southern Jutland in Denmark and the adjoining area of northern Germany. The hope is that the artists’ different approaches and artistic vision will create work that highlights the exceptional natural environment and unique interaction between nature and culture in the Wadden Sea, shared between Denmark, Germany, and the Netherlands. For thirty-five years the governments of these three countries have been working together to protect the landscape, the birds, and the sea mammals of the region. The National Park works closely with local inhabitants and stakeholders to safeguard the area’s cultural and natural history. 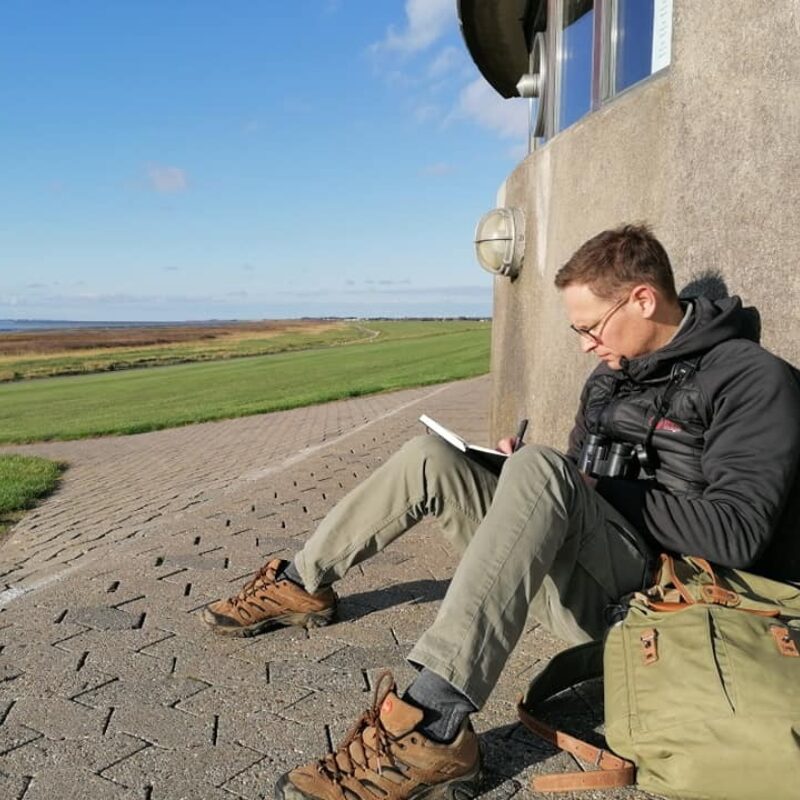 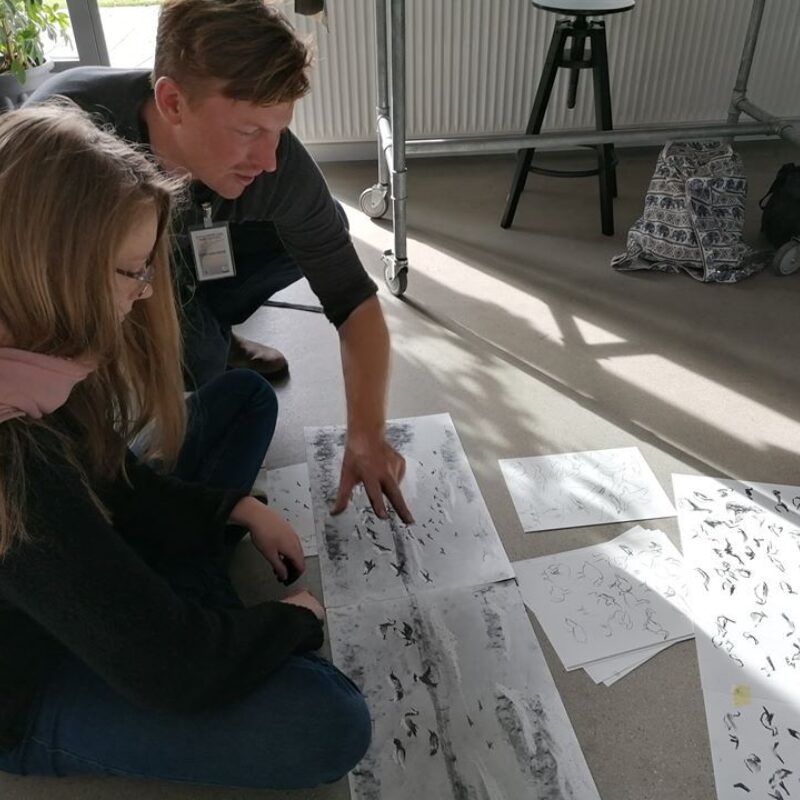 The first residency of the Wadden Sea Project took place in October 2019. This visit will be followed by a second residency in the spring of 2021. As well as the body of work created by SWLA artists during the two residencies, the artists will be delivering a programme of workshops, events, and cultural activities for the local public and school children. An exhibition of the artists’ work and a book written by Colin Williams are also planned. The success of this project depends on its ability to connect to the local population and also to a wide range of stakeholders. It is hoped that this project can, in a concrete way, engage young people and raise their awareness of their common cultural and environmental heritage.

The first residency in October 2019 focussed on the southern part of the Danish Wadden Sea and the marshlands around the town of Tønder. Project coordinators Marco Brodde and Nik Pollard were joined by SWLA artists Kim Atkinson, Julia Manning, Harriet Mead, Kittie Jones, Darren Rees, Jane Smith, Esther Tyson, Chris Wallbank, and Ben Woodhams. The group was further augmented by freelance writer Colin Williams, who joined all the excursions, taking his notepad and pen, rather than a sketchbook. The group was fantastically accommodated in the small village of Højer, from where they made daily excursions to various sites in the surrounding area, some by foot or cycle, and some by minivan.

The marshes around Tønder are surrounded by several dikes which have made it possible to reclaim land from the shallow Wadden Sea. The first dikes, established in 1556, protected the low lands around the town against storm surges, allowing new marshland to develop through the tide’s natural sand deposition. Over centuries man and nature joined forces and the slowly changed the seascape into landscape. During the early 20th century, modernisation and the investment of electricity and the establishment of over 300 kilometres of channels, changed the landscape still further. Nevertheless, the traditional grazing and water management practices still allow space for the spectacular birdlife. 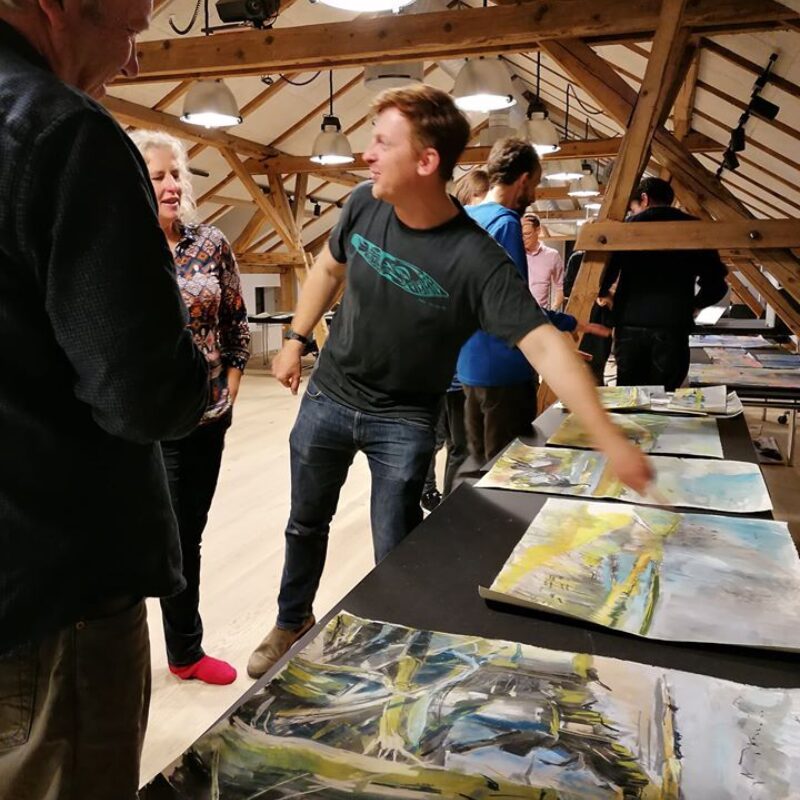 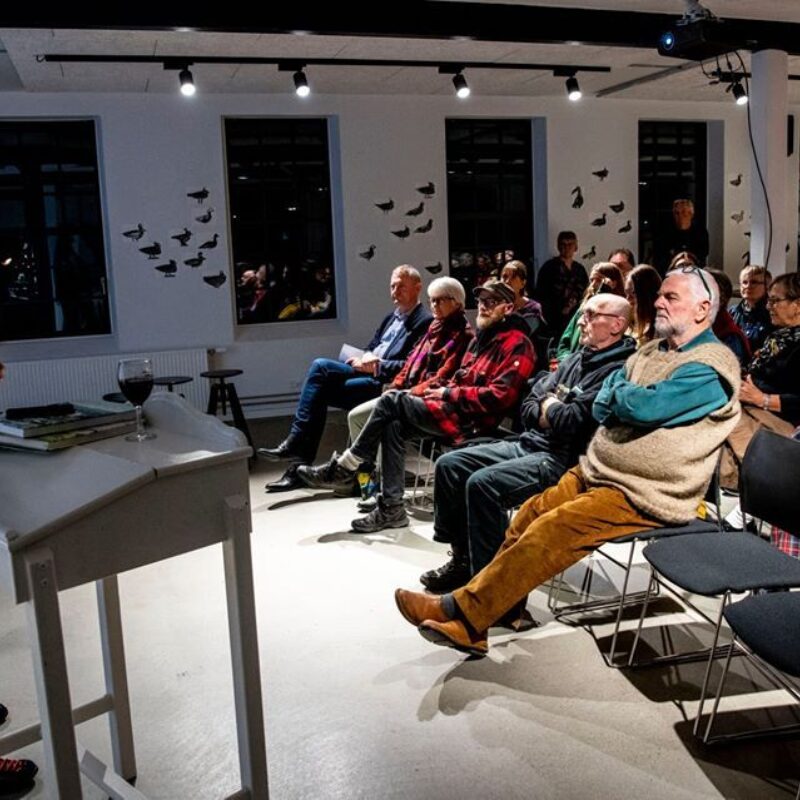 This then, was the wildlife Eldorado the SWLA artists found themselves in. The huge tidal fortifications just ten minutes walk away were regularly visited and a rich source of inspiration. On one of the days, Marco had arranged an ​‘open painting’ session, where members of the public were encouraged to talk to and interact with the artists whilst they worked. This proved very popular and surprisingly large numbers of interested locals came and talked to the artists — luckily in almost universally flawless English. The event was also attended by representatives from some of the organisations and companies that had supported the project and was well as covered by the local media. A drone flew overhead recording the scene, and the artists were made to feel rather special.

Another excursion took the artists to one of the sluice gates, where we were given a tour of the sluice building and learned about the incredibly complex management of water and its impact on the environment.

A trip to the nearby island of Romø revealed the incredible numbers of birdlife in the region. The island is joined to the mainland by a raised road — surrounded by mudflats in low tide and almost submerged at high tide. All the way on the drive across to Romø, for perhaps three or four kilometers, huge rafts of waders and ducks rested on the mudflats by the road in incredible numbers. Another trip just across the border in Germany, revealed equally impressive numbers of birds, with huge swirling flocks of waders and geese put regularly up by merlins, peregrines, or lumbering sea eagles, against a backdrop of torrential showers, gunmetal skies and bursts of sunshine. Amazing!

As well as trying to record the staggering numbers of birds, the huge skyscapes and ever-changing weather, the artists were also busy delivering a series of workshops to children from local schools. Nik Pollard led a workshop, assisted by Kittie Jones and Marco Brodde, where he engaged the children into producing monoprints of barnacle geese, lapwings, and curlews — with spectacular results.

Chris Wallbank, Kim Atkinson and Julia Manning worked with a group of slightly older children and had them producing wonderfully expressive charcoal drawings, some of which were based on observations of projected films.

Ben Woodhams, Darren Rees, and Esther Tyson worked with a group of kids from the local German-language school and managed to encourage them out into the surrounding countryside, where well-timed skeins of geese and even a rainbow provided much inspiration.

On Thursday night, Marco had arranged for project stakeholders and the local public to attend a series of illustrated talks on the Wadden Sea, Denmark National Parks, the SWLA and the project itself. This well-attended event was topped off with an informal ​‘question and answer’ session chaired by Colin Williams.

The ​‘human’ element of the project — its interactions with the local community and attempts to make bridges between art and culture, nature and landscape, were an integral part of the project. Equally important, however, is the international character of the project: the efforts of the British and Danish artists working within an area straddling three countries reflected by the international journeys of the birds passing through and refueling in the Wadden Sea. The second residency based in Fanø, postponed to Spring 2021 because of the coronavirus, promises to be equally exciting and inspiring… 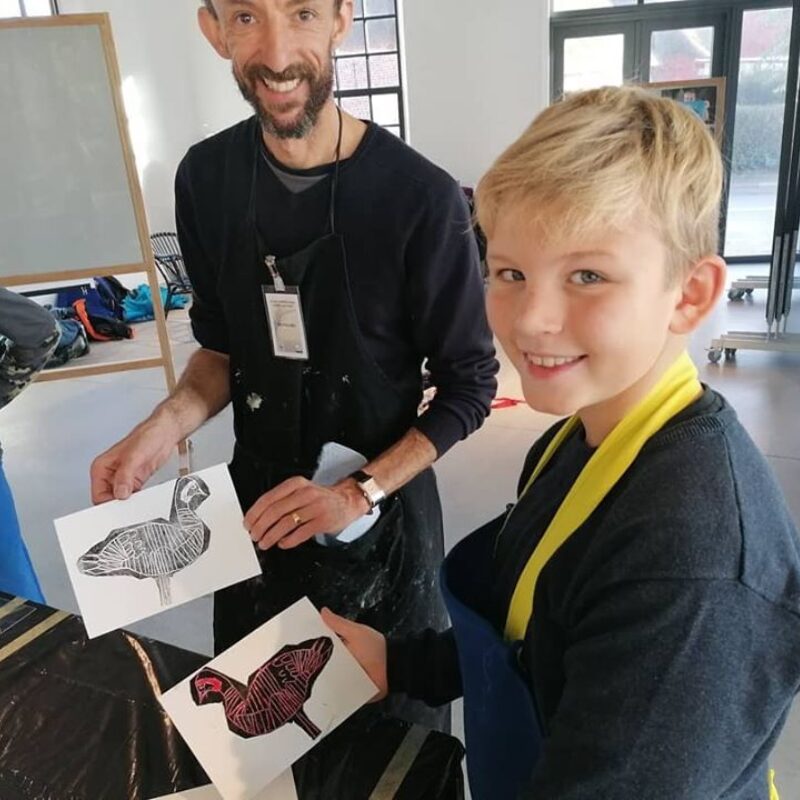 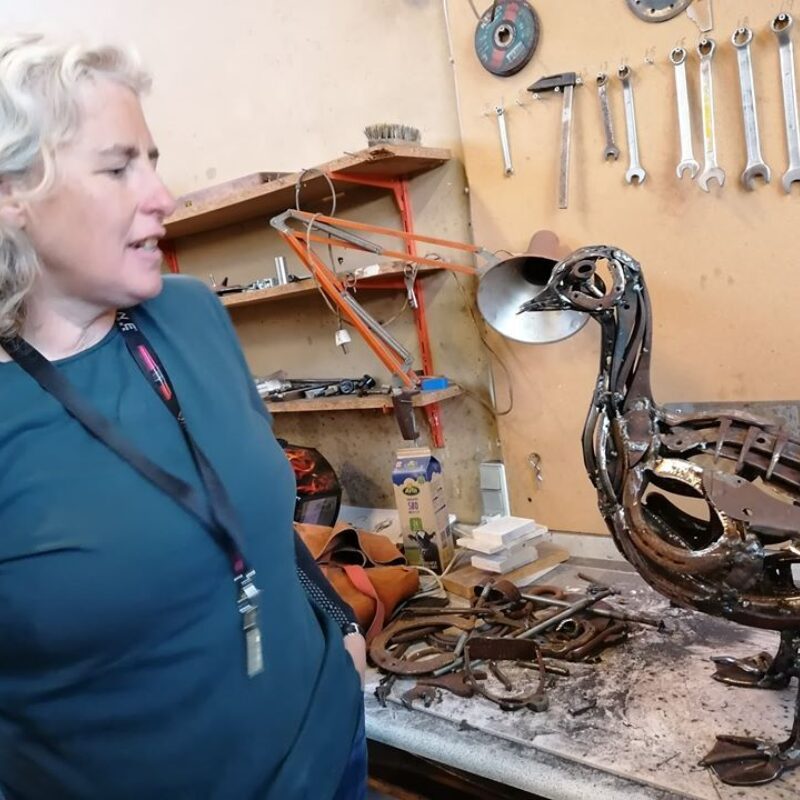